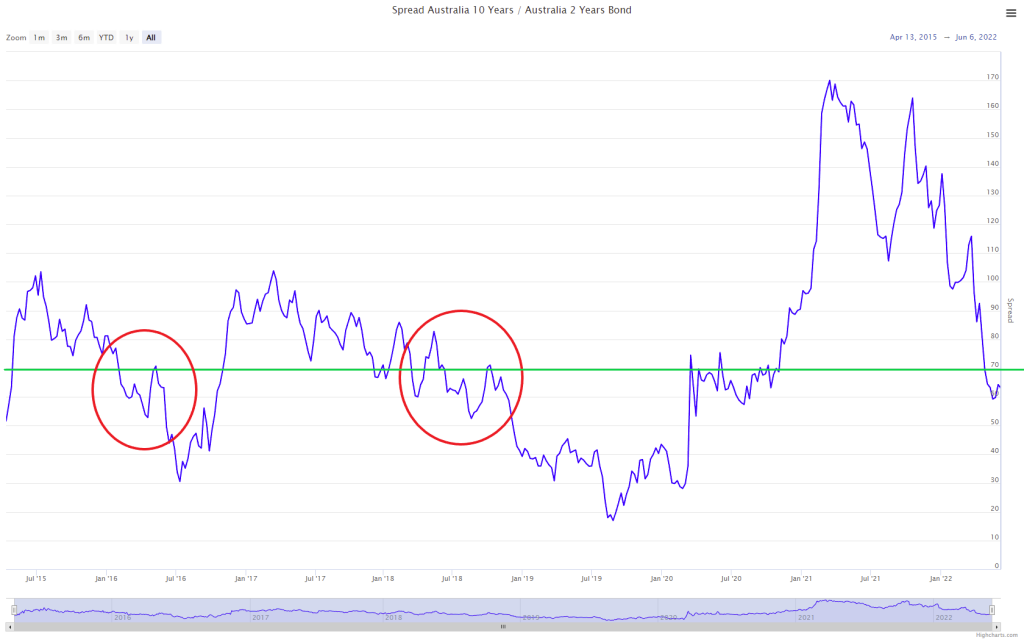 Despite many indicators of a pending recession, the Australian yield curve is yet to invert. The inversion of the 2’s v 10’s has always been a reliable recession indicator in the US, but it is hard to know what will be the signal in Australia given we have not had a recession for 30 years.   A quick look at the relationship between the 2’s v 10’s and the ASX200 index provides some insight.  The 70bps spread appears to have some technical resistance/support characteristics and we dropped below that on the 25th of April.  The last two significant market bottoms were 10 February 2016 and 24 December 2018.  Both of those bottoms follow shortly after the 2’s v 10’s spread falling below 70bps.

On previous occasions, the fist break through 70 bps has been re-tested, and that re-test might be the indicator for when to start buying.

Notwithstanding, it is hard to be bullish with such an unconvincing rally

The base case remains an Australian recession 2H2023

In April on Ausbiz I spoke of the expectation that repricing of Australian fixed rate mortgages (amongst other contributing factors), would be the likely catalyst for a recession.  Since then, markets have added more complications, most notable the further 20% rise in energy costs.  The magnitude of the current energy crises was highlighted when two large scale Australian energy retailers recommended their customers seek alternative supply.

The average Australian spends roughly 56.5% of their income on housing, energy, food, and transport.  Recent market movements indicate that by the middle of 2023, without some form of intervention, average annual cost of living could increase by ~11%.  Coal and Brent are at present testing recent highs and Saudi Aramco’s more than expected price increase is not doing anything to cool the rally.  Further, Origin’s report last week citing challenges keeping coal up to the Eraring Power Station was very bullish for the commodity and suggested we may make new highs.

Why are the markets rallying then?

To be fair, not all sectors of the market are rallying.  It just happens that a large proportion of our market is tenanted by energy and materials which is lifting the index.  The bifurcation is pronounced, energy and resources strongly outperforming consumer discretionary and technology, and enough to strengthen the broader indices despite the drag.

What is perplexing is the strength in the banks.  Considering that consensus is building around a ~15% decline in house prices, housing loan approvals declined more than expected (down 6.4% MoM in April) and cost of living continues to squeeze households, financials have outperformed the ASX200 year to date.  It is difficult to comprehend how the building case for a recession and negative wealth effect would not be negative for loan growth and default risk.

Two fortnights ago I felt like we were at the near-term bottom for markets, and I still think that holds true.  Valuations, in some cases, are undemanding and in the case of the US there is some scattered value.  The bounce in the US I can justify– but save for energy and resources, the Australian bounce seems to be just following big-brother and lacks substance.

There are pockets of value in both markets, but I fear for the index ETF providers. While we unwind years of QE, I suspect returns will be concentrated in specific companies and sectors providing a competitive advantage for the active managers.

I am still overweight energy and resources—underweight financials, technology and consumer discretionary.  I have also been buying some of the high-quality listed property REITS and corporate fixed income as a barbell for income in what could be a period of low growth.  If the 2’s v 10’s fails a re-test of the 70bps level, long dated fixed income and some rotation into growth could be a good trade.