The 4th quarter rally into the Christmas break was expected, but I admit the pace and extent of the move caught me a little by surprise.  The ASX200 added 8.56% during October putting us back to about the pre-COVID high in November, a logical place for the market to take a breather or so I thought.  Fundamentally I suspected that from there, with a lack of economic catalyst data in December, the market would slowly melt-upwards into December 31 and finish the year a little above the 7,100 mark.

Instead, the market leapt ahead on November 11 after US economic data suggested that inflation had peaked.  With the exception of the last couple of trading sessions, the market has broadly maintained the bullish sentiment.

Year to date the energy sector has been the standout performer up 52% followed by utilities (+31%) and materials (+17%). Thesan’s tactical sector allocation continues to be overweight those three sectors, with a slight overweight allocation to information technology, which is predominately made up of our investment in Computershare, one of the few companies in the sector to be up year to date. 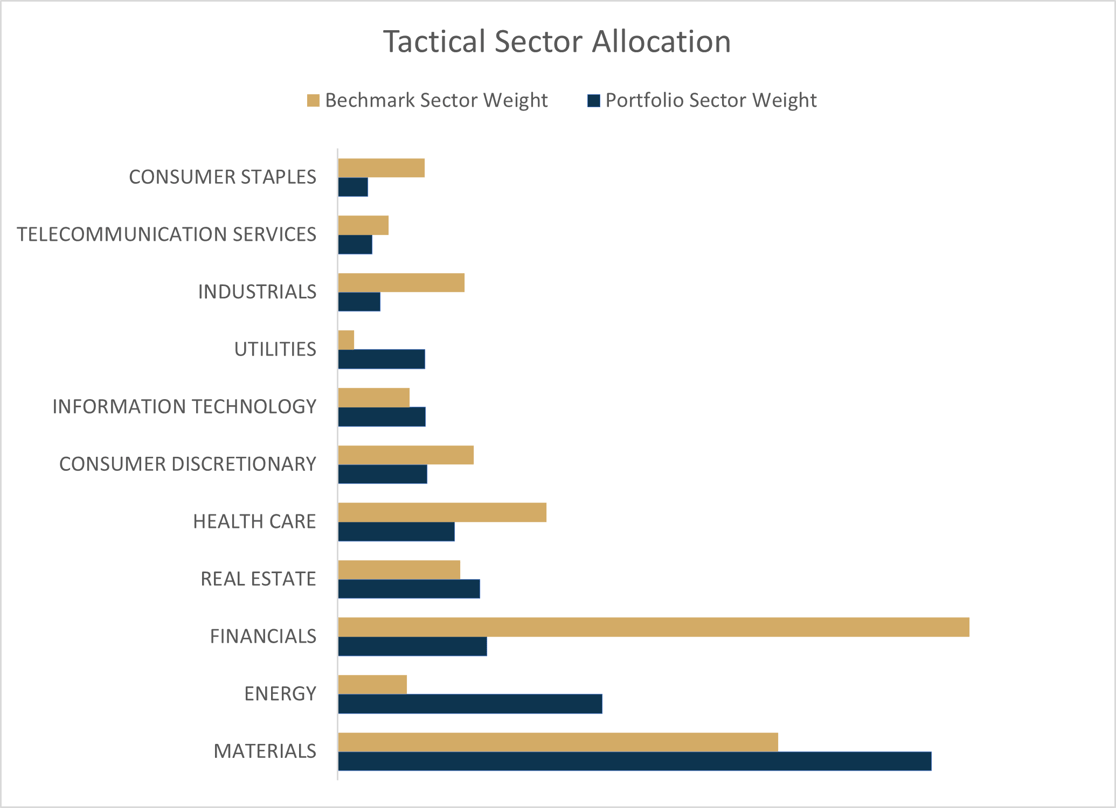 In terms of individual names, recent purchase of AGL and Ramsay Health Care performed strongly during the quarter. Elders was the biggest detractor having declined 20% in value after announcing the departure of their current CEO.

Outside of energy and materials, the Australian market has lacked compelling opportunities hence our higher-than-normal allocation to cash. Acknowledging that the high cash allocation has caused the portfolio to underperform the index during the quarter (7.54% vs 12.91%), I’m relatively confident that the opportunity to buy-in will present in the first half of 2023, particularly in the US.

There’s little doubt that 2022 has been a tough year for global markets. We’ve seen both the Fed and the RBA lift interest rates at the fastest pace in decades from near zero to 3.1% in Australia, and (assuming a 50bps rise from the Fed in December) 4.5% in the US.

This has obviously repriced both fixed income and equity portfolios causing investors to see red – both literally and figuratively!  I believe that markets will retest 2022 lows next year and go lower.  So why my optimism? – Because 2023 could well be the year of opportunity.  But to explain why I think it’ll be a year of opportunity, let me dust off my crystal ball and make some predictions about 2023…

Prediction 1 – The Bond market is always right, and we’ll see a US recession in 2023. This will have a global impact.

2s10s (the difference between 2yr and 10yr US bond rates) is the best predictor of a US recession and a US recession is the best predictor of a global recession. When the 2s10s spread is negative it means the bond market believes that future rates will be lower than current rates because the central bank will have to cut rates in an attempt to raise economic growth. 2s10s haven’t been this negative (~80bps) for 40 years. Note also those economic recessions came approximately a year after the 2s10s inverted. See graph below.

That doesn’t mean that the recession is going to be long, deep and painful. The bond market is not signaling anything relating to severity, although I do acknowledge that the size of the inversion signals that rates should move substantially lower in the future (which translates into a major economic slowdown). If we couple this with the forecast European recession, it looks like we will have a global slowdown in 2023. Bottom line – There won’t be a ‘soft landing’.

Prediction 2 – Inflation has peaked but it will be sticky. Ultra low interest rates won’t return.

Leading indicators are telling us that inflation has peaked and has started to decline. I am however of the opinion that inflation and rates are not going back down to zero any time soon, if ever. There are a few factors for this that include – deglobalization as the world moves to on-shoring and near-shoring,  demographic shifts across the developed world and rising energy prices as China moves beyond Covid and the US replenishes the SPR. Inflation will always be bubbling under the economic surface, and I’m not convinced that central banks can move back to their 2-3% inflation targets easily. There’s no doubt that both the Fed and the RBA have taken credibility hits in 2022, and they won’t be too keen to release the brakes too soon as a result. The last thing they want to invoke is market uncertainty caused by ‘stop/go’ monetary policy. Expect a central bank pivot within the next year, but don’t expect a full reversal. Monetary policy is tighter than interest rates suggest given the Fed has initiated quantitative tightening meaning that liquidity continues to drain from the US economy as the Fed reduces it’s ~$9tn balance sheet. The shrinking growth in the money supply is one major reason why the US dollar is so strong. See YOY growth in money supply below 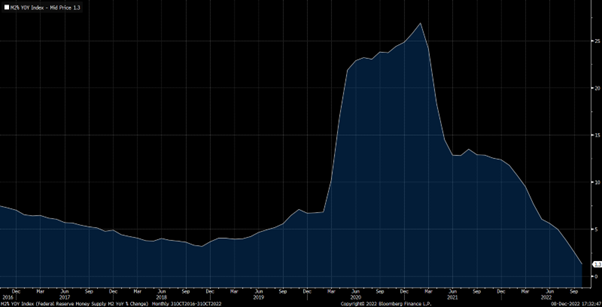 The above two predictions will mean that both company earnings and multiples will decline. On average the US market sees a total 30% peak to trough reduction when the economy enters a recession. That equates to 3400 on the S&P500 although it could overshoot. It’s almost impossible to call the bottom but average forward EPS estimates vary (mostly) around the low $200 area. If we take the long term average multiple of 15 we come out around 3000 on the S&P500. There’s still a lot of money sloshing around from the QE days so multiples could be higher. The US consumer is famously resilient so EPS could also come in higher. Regardless of assumptions investors don’t want to miss this opportunity. And this, in a nutshell, is why I’m so optimistic…..

I’ve been through a lot of bear markets – the Asian crisis, the Nasdaq crash, 9/11, the GFC and the Covid crash, and all of them had one thing in common – they weren’t induced by the central bank. They were market induced with ‘irrational exuberance’ and leverage or brought about by one of the 4 horsemen. Those bear markets were much scarier. In 2007/8 we had no idea whether the entire financial system would collapse. In 2020 we worried that the world was entering another period of ‘black death’. In 2001 we wondered if America would be under constant terror attacks while at war in the Middle East. In 2022 we are worried…..about central banks raising rates?… This is the best bear market we can get! After all, you want to buy stocks when they fall, not when they rise and stocks never fall when everything is fine. If central banks can raise rates, they can cut them as well. Don’t miss the opportunity to buy quality stocks in 2023 so in 5yrs time you aren’t looking back thinking ‘coulda, woulda ,shoulda’.

The table above provides an example of how far some of the largest technology and consumer discretionary companies have fallen this year. This list is not a recommended ‘buy’ list but does illustrate to investors that some of the world’s largest companies are substantially cheaper in price than they were in January. Recessions and bear markets don’t last forever, and investors need to be armed with ‘shopping lists’ and execution prices as we move into 2023.